Guide to Snakes on Kansas Trails

“There is a stigma surrounding snakes that they are evil creatures that only want to attack,” says Eric Viera, a Kansas City-area trail runner, herpetologist, and would-be best friend of any trail runner who’s ever been spooked by the wide variety of snakes seen in our area.

We asked Eric to share his expertise and tips with the Trail Hawks. 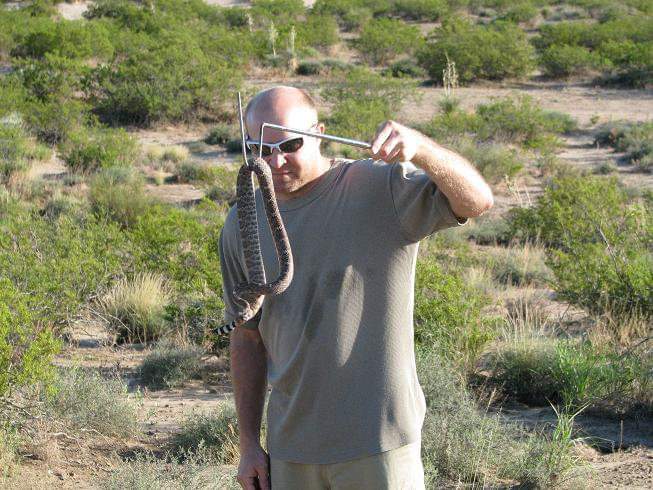 Eric, tell us a little about yourself.

I have a Wildlife Ecology & Conservation degree from Northwest Missouri State University. Upon graduation, I started working with reptiles at a zoo. Before realizing that student loans actually do need to be paid back, I was at my third zoo job where I was the Reptile and Amphibian supervisor at the Palm Beach Zoo. During my zoo career I had the pleasure of working with a wide variety of reptiles and amphibians, bats, arachnids, and numerous other animals. I specialized in venomous snakes and worked with a wide diversity including various pit vipers, vipers, cobras, spitting cobras, black mambas, green mambas, king cobras, and the coastal taipan. I left the zoo career in September 2006 when I moved to Kansas City and started working as an ecologist.

Tell us a little about your running -- any big races in your past or upcoming?

I started running races in 2008, before then I ran while playing soccer and for the fitness tests in the Navy. My toughest race was probably the Cactus to Cloud 50K in my hometown of Alamogordo, NM. It was a fun race where you start in a valley at about 4,500 feet elevation and then climb to over 10,000 feet elevation within the first 5 miles. It was a very beautiful race and I can’t wait to run it again. Sadly, I haven’t ran much since 2016 but am currently working my way back with plans to run another ultra in 2022. As for now, I don’t have any races on the schedule, but I’m sure that will change.

How did you get into herpetology?

My Mom tells me that since I could crawl I have been chasing after snakes and lizards. They have always been fascinating to me. I’ve kept snakes as pets since the mid-80s, including the occasional rattlesnake. So I guess that from a young age I always knew I wanted to work with reptiles.

How snake-aware should trail runners be?

Being that you can easily zone out during any of those activities, and running actually causes more vibrations than just walking, there can actually be less risk while running depending on the terrain, especially if the snake is warmed up and alert. With the vibrations from running there is a greater likelihood that snakes will sense you coming and try to get out of the way or remain hidden.

The biggest risk would be if the snake is resting behind a log or rock, as it might feel more secure and less likely to get off the trail. No matter how you navigate the trails, be it hiking, biking, or running, it’s good practice to always be aware of your surroundings. There are far more dangerous things on the trails than snakes such as that tiny stump or rock you don’t see, slick surfaces, and other people.

It’s been said that snakes are some of nature’s most misunderstood creatures? Why is that?

That’s definitely true. There is a stigma surrounding snakes that they are evil creatures that only want to attack. In truth, like most animals, snakes would rather get away and avoid a confrontation. Because of the stigma surrounding snakes, I do not like using the term “aggressive” when it comes to their behavior. What people take as the snake being aggressive is just their defensive behavior. If you’re gentle with the snakes, you can handle many of the harmless species without them even striking, at least once they realize that you aren’t trying to harm them.

So, what are the most common types of snakes we see on Kansas trails, and do we see enough venomous snakes in our area to warrant paying extra attention?

The most common venomous snake to see on the trail are the copperheads; the sightings of timber rattlesnakes are not as frequent but are still common. The frequency of both snakes being encountered on the trails is frequent enough to warrant paying extra attention. 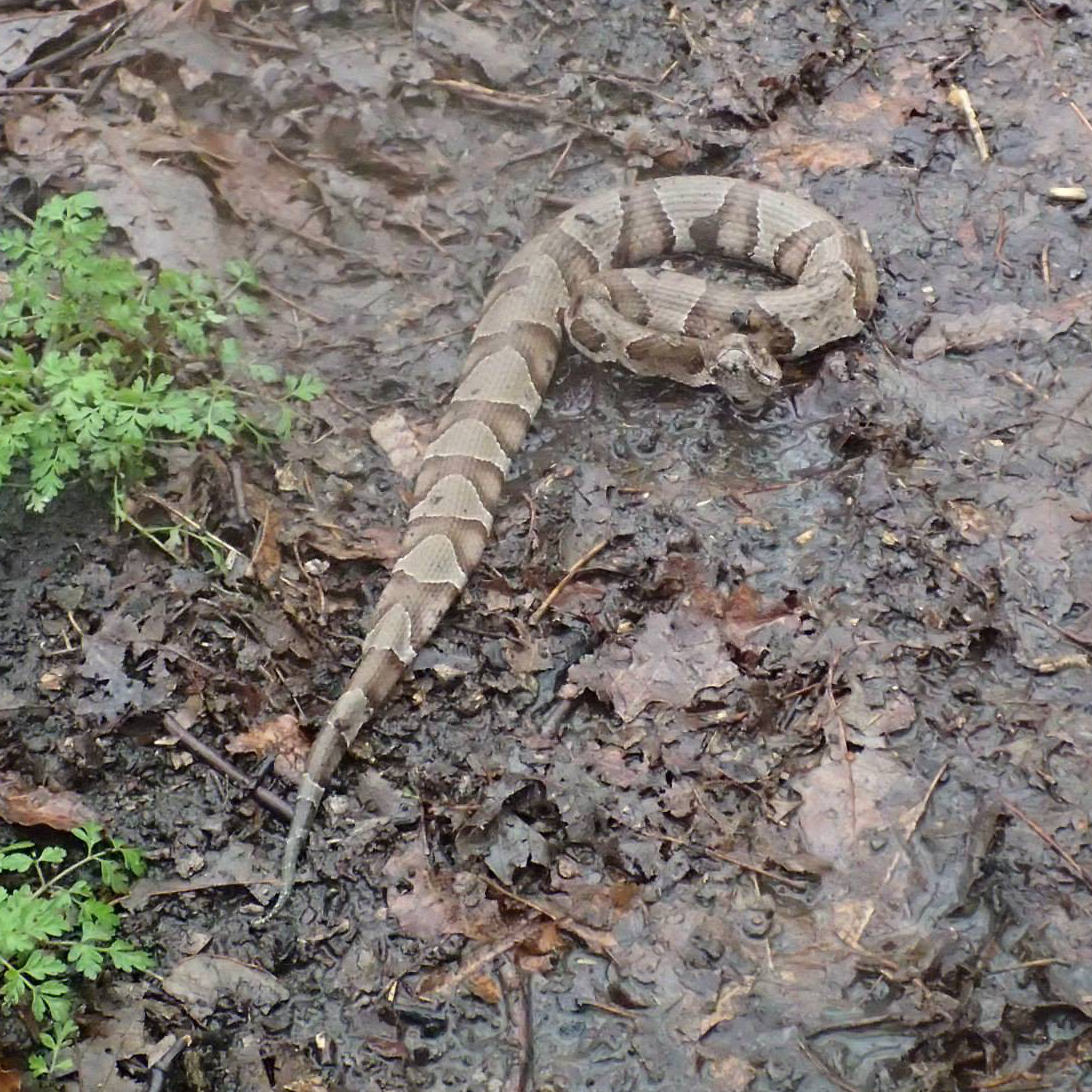 Most runners would only come across snakes when the snakes are “basking,” right? Or on those occasions when snakes are crossing the trail? Or are the open stretches of a trail sort of naturally alluring to snakes?

Correct. The snakes will generally use the trails for basking or just cross the trail to get to another habitat. For the most part, snakes like to have some cover to feel secure. The open area of a trail would leave them exposed to predators such as hawks, owls, cats, and humans. However, snakes could use the cover of the trail edge as an ambush point while hunting for food.

What are the basic steps for runners to follow when they come across snakes on a trail?**

The best thing to do, especially if it is a venomous snake or you can’t positively identify it, is to leave the snake alone and either wait for it to move off the trail or give it a wide berth and slowly move around it. Snakes do not go out of their way to attack people and only strike in self-defense and out of fear. If left alone, the snake will eventually move off the trail.

(Editor’s note: Have you ever seen a snake grateful for a little water? Or a bubble bath?)

How do most bites occur with runners? And what are the basics for dealing with a bite?

I believe that most bites with runners occur when a runner steps on the snake and when they try to force the snake off the trail. If you try to move the snake, do it gently so the snake feels less threatened and it will be more likely to slither away than take a defensive posture and strike.

If you are bitten by a nonvenomous snake, just wash the bite with soap and warm water and treat it like you would a scrape.

If you are bitten by a venomous snake you should do the following:

You’re known on Facebook for your helpful guides that give runners more insights into snakes, the different species we see on local trails, and how to handle emergencies. Why have you taken on this task?

I have seen a lot of people post pictures of watersnakes, rat snakes, king snakes, etc. with a lot of comments identifying the snake as a copperhead or cottonmouth. I provide the identification tips to try and help people distinguish the harmless snakes from venomous snakes, not only to hopefully make some people feel a little more at ease but also to prevent harmless snakes from being killed due to misidentification.

When it comes to snakebites, there is still a lot of outdated information out there so I provide the information to educate people on what to do in case of a bite. In my opinion, knowing what to do will help the person stay calmer which can lead to a better outcome.

What are some of the most common misperceptions about snakes that you hear?

Good question. Probably one of the first ones would be that just because the snake is swimming on the surface of the water does not mean it is a cottonmouth. Cottonmouths have not been recorded in the Kansas City area so there is a very slim chance that the snake you saw swimming in a local lake or stream is a cottonmouth.

Secondly, if you smell cucumbers it does not mean that a copperhead is nearby.

I don't know where the cucumber myth originated, but it is widely perpetuated. Although I have never smelled cucumber from a copperhead, it may be possible that some people think the foul-smelling musk a copperhead gives off when threatened smells like cucumbers. However, if that's what a cucumber smells like, I doubt anybody would put one in a salad.

Lastly, juvenile venomous snakes are not more dangerous than adults. Their venom is not more toxic and they also have less venom to inject than an adult snake. When discussing the severity of a bite from a single venomous snake species, the severity of the bite will generally come down to the amount of venom injected. Since snakes can control the amount of venom they inject, a larger snake doesn’t necessarily mean a more severe bite, rather just that it is capable of delivering a more severe bite if it injects all its venom. 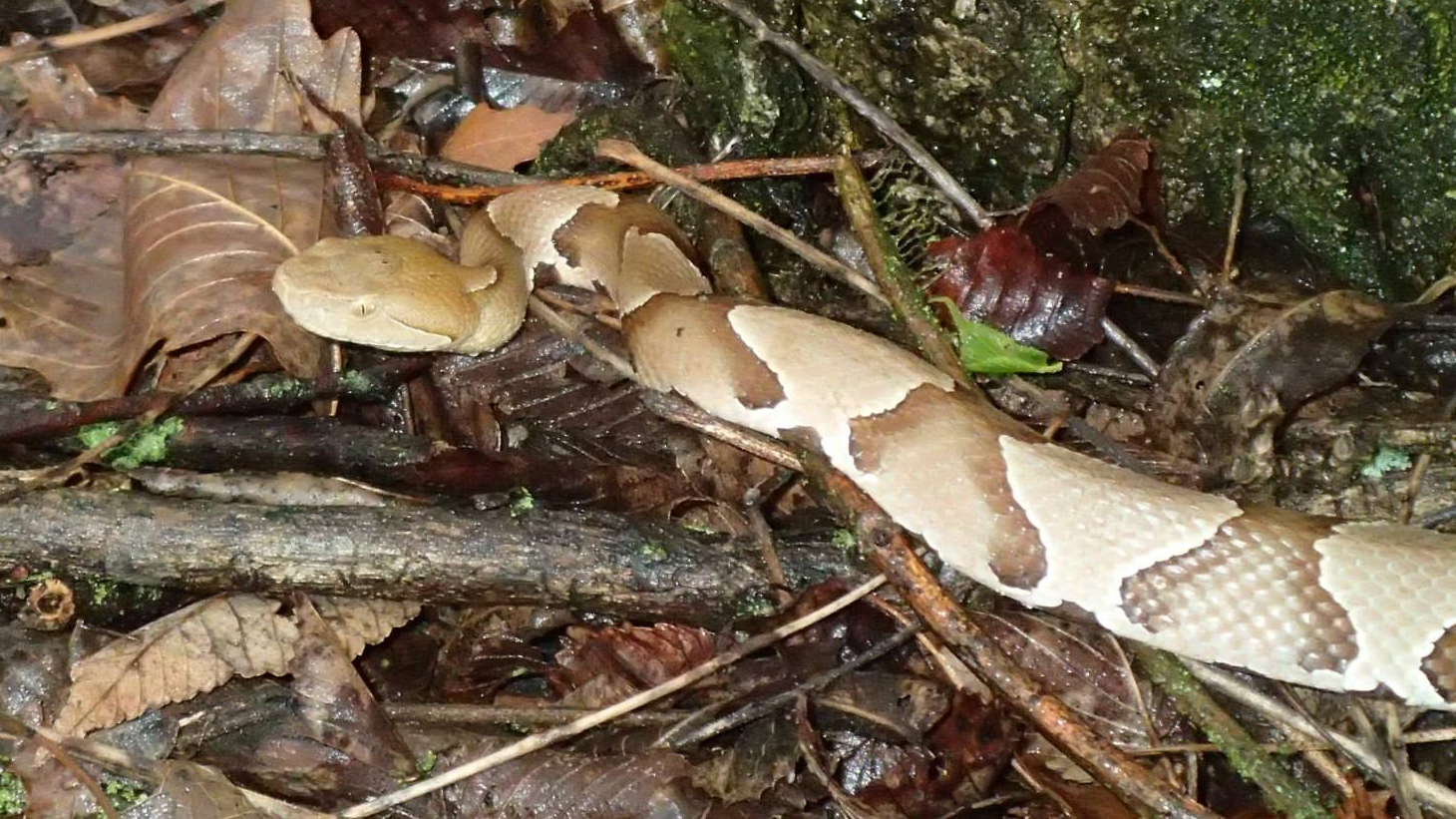 Interview was conducted and written by Chris Clark.